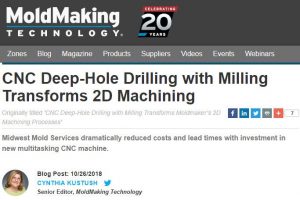 Midwest Mold in Roseville, Michigan, used to outsource boring mill and gundrill work to companies that service the overflow from mold builders with more work than they can handle. It became clear over the last two years that with the boom in automotive jobs came elongated lines of shops waiting for that work to be done and returned. Once the work came back, the rush would begin and overtime became standard, as were extended lead times. Because of this, Midwest Mold became the first mold shop in the United States to purchase a CNC machine from Cheto Corp. S.A. (Oliveira de Azeméis, Portugal), an investment that brought the outsourced work in-house and solved multiple challenges, according to Midwest Mold President and CEO John Hill.